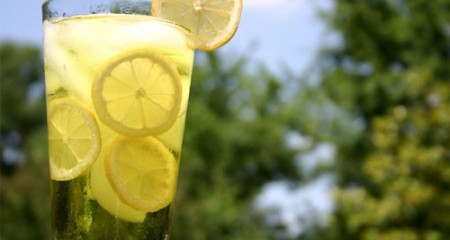 I don’t know what it is with drinks manufacturers, but it doesn’t seem to be possible to buy a nice soft drink without it being packed with sugar. You can buy soft drinks of the ‘squash’ variety (much beloved of R) made with artificial sweeteners, you can buy ‘diet’ fizzy drinks like coke and lemonade – but as soon as you try to go a bit up-market and try for a traditional cloudy lemonade, or an elderflower cordial, or anything nice really (I hate anything synthetic tasting), suddenly everything is packed with sugar (and hugely fattening quite apart from in general bad for you).

So I have taken to making my own lemonade, using stevia to sweeten it a bit. Stevia is a natural sweetener made from a leaf and available as a granulated powder resembling sugar (but three times as sweet). It smells odd, though not unpleasant – vaguely like coffee – but that goes away when added to food and doesn’t taint it at all.

Take a bag (five or six) organic, unwaxed lemons. Cut them in half and squeeze the juice into a large jug. Take all the skins, score with a fork (to release oils from the skin) and put them in the jug too. Cover with boiling water up to the top of the jug. Don’t put in the fridge but allow to cool naturally. Next day, squeeze the now soggy skins into the jug one by one and discard. Pour the liquor into a clean jug though a fine sieve. Stir in stevia powder to taste (careful not too much). I like this diluted about 50/50, which you can do by adding massed of ice. Serve with a sprig of mint. No sugar, no calories, all taste….