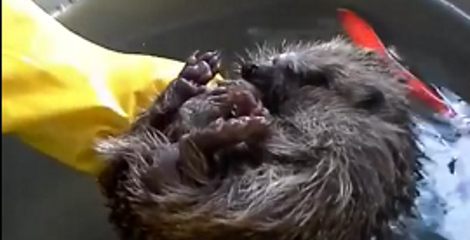 Update on the baby Hedgehogs

Some time before Christmas I had the great fun of visiting some orphaned baby hedgehogs who had been taken in by a friend of my Mum’s who is a White Witch. Well today I got an update on them…

Last year they were small and looking rather sad as they had had a series of skin diseases which had caused them to lose most of their fur and prickles. Today’s video shows them getting a bath to get rid of the last of the nasties – the prickles are all back and they are furry on their faces and tums where before they were nearly naked. They are also about three times the size they were, and look to be quite a handful.

They will be looked after until the spring when they will be released into the wild.

I sort of wish we had some hedgehogs but they are not compatible with badgers which apparently are the only creatures which will eat them.

This is a link to the (very sweet) video – Click here