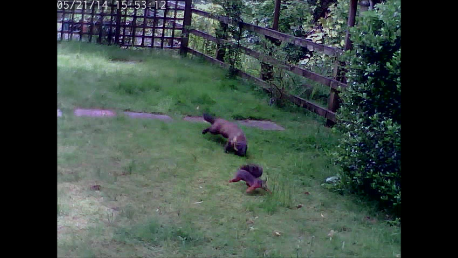 In which Marten nearly catches a squirrel

I don’t believe the fantastic week we have had for wildlife sightings here. First the otter – and then on Wednesday (when unfortunately we were out), our Marten visited for a lengthy period during the afternoon. He obviously came for a snack on the nuts, and then decided that he would have a try for a main course of squirrel! He didn’t get one on this occasion, although he came pretty close.

I would not much have liked to see it if he had caught one because they are charming little creatures (although not as sweet as they look because they do not get on with each other), but that must be a wildlife lover’s dilemma because the Marten has to eat and squirrels are one of his main foods.

Then this afternoon R saw him near the greenhouse and we both watched him for a minute or so before he disappeared into the grass. I actually thought we would see less of the carnivores in summer when their food supply is plentiful, but I was obviously wrong.